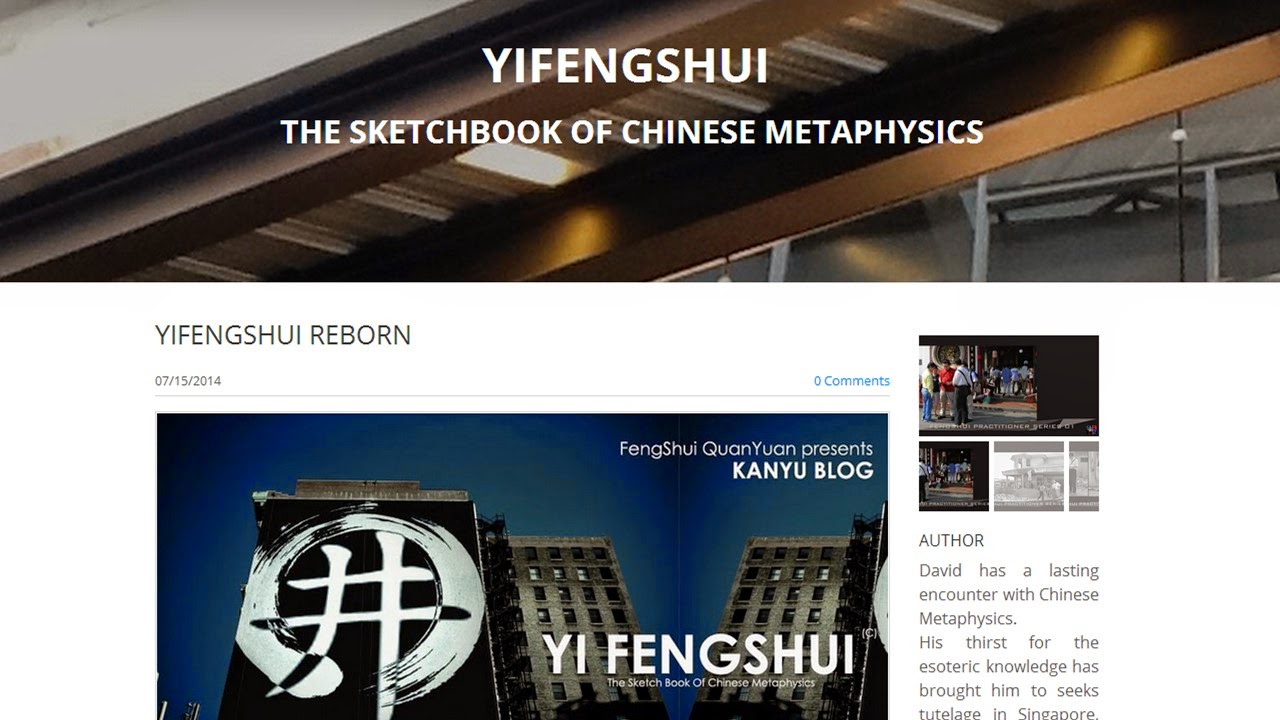 We are migrating to another platform... Please visit http://www.davidyek.com/yifengshui for latest installations. The current content in yibazi.blogspot.com will be removed at anytime without notice... Have a great time visiting our new host in davidyek.com. Thank you. 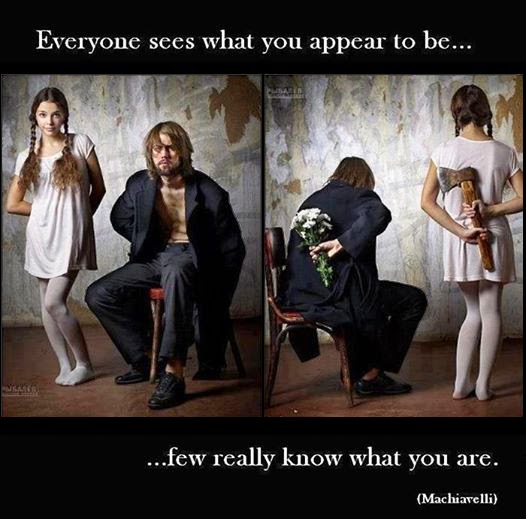 It has been sometimes since I last wrote in YiBazi. Let’s go to some very basic fundamental. What is Stem and what is Branch? Stem is something you can see from the appearance. Branch is something you cannot see. Not because it is hidden but it is mixed. Among these mixed Qi, there appear to be one that predominantly strong while others hidden. The hidden Qi are the mixed emotions. That can only happen for a person. Therefore, reading hidden Qi reveals the hidden agenda of person and also the hidden sickness a person may succumb to inherit.

These 2 pictures revealed strongly the interplay of stem and branch. One may look good but with hidden danger while the other may look bad but with hidden goodness. It means to say, if you look at a pillar itself, the stem tell you one thing, the branch the other thing, the branch’s main Qi some other while the hidden Qi yet another and a combination of stem and branch also another set of story. The same apply with the luck pillar. One may be in good luck but there is inherent danger. One may be in bad luck but there are new opportunity arising. So, reading BaZi is not really about reading the apparent face value. Face value tell you one thing but one must also understand what is behind such especially on matter of health issue.

Wealthy But No Wealth Stars - Something Must Be Wrong? 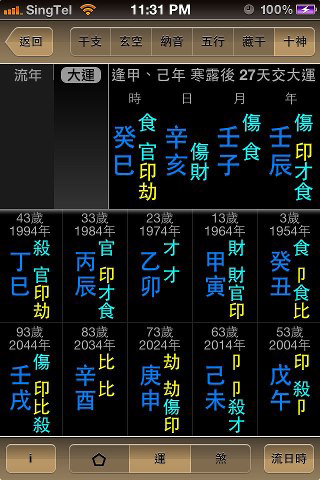 One of Daniel Bakerzin’s interesting charts. Is this a classic example of a Fake Follower or rather just another weak chart?
XinHai, glittering pool in sheer winter. Frozen? Not really. Just lucky that the bearer of this chart is born in Si hour, sheer afternoon sun. Yet, in winter the chill would “insult” the sun. Classic says, “调候。金水生于冬令，木火生于夏令，气候太寒太燥，以调和气候为急。此以调候为用神也。”, Adjusting Climate, Metal or Water born in winter month, Wood and Fire born in summer month, the climate is either too cold or too hot, and then to adjust the climate is urgent. This is Climate adjustment as Useful God. So, naturally fire would be the Useful God.
Fire in hour pillar would be good to this person. Everything he does unknowingly turns to Gold. You mean Gold? Where are the wealth stars? Chen is the storage of water and graveyard of wood. Its wealth is 6 feet under, yet how on earth could he be wealthy?
This is where Adjusting Climate, Metal or Water born in winter month the climate is either too cold and then to adjust the climate is urgent, is very misleading. So, to put a person above the stove of fire for being lack of fire in his chart is a big mistake.
Another school would say that this Xin person is not metal per se but Ren water as it follows the seasonal Qi. Xin does not take the imagery of fine jewellery but the sparkling metallic look of water bodies. Being in the afternoon, the view is majestic. No need extra adjustment; by itself it is already complete. That is why he does not need wealth star, as others bring wealth to him. How lucky!

GE-13 of Boleh Land, Who Will Run Putrajaya? 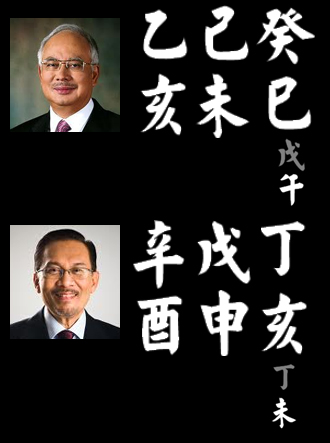 Bolehland GE13 is just round the corner. It was reckoned to be the “Dirtiest Election Ever”. Punters are ready to bet. FengShui masters are ready to sell out their souls to predict. By these time, any sort of winnable methods be it FengShui to the hocus-pocus stuff are put in place. Let us just look at the BaZi of both candidates and do what we do best – PREDICT! With the absent of the hour pillar, we can always find an excuse to save grace if our prediction goes awry.
Let’s start with JibKor. Yi wood born in earth month, potentially a weak chart, favoring self, officer and resource stars. LP is wealth sitting on output luck, possibility spending to buy support. Just look around all the 1M campaigns and tidbits hovering out of the expanse of taxpayer’s money. He has done it well to his favor, another hint of “high handed” masters? GuiSi comes in, fire seasons combination denotes it is timely that someone is also, trying “very hard”, to purge him. Annual outlook favors him especially so with resource protruding.
Let’s look at WahKor. Xin born in metal month. One theory state, this is potentially a strong chart favoring output and wealth - typical of a “Yo-Yo” life. Undergo officer sitting resource luck, possibility trying to manage his unmanageable partners while trying to seek comfort in what he does best – EXPOSE. Just look around the weak coalitions as well as his own party members and yet, he is talking his way through. Unlike JibKor, his “high hand” master has done a lousy job. He is not seen capitalizing his lousy luck to his advantages and true to the spirit of the game, he is a One Man action hero. Comes GuiSi, output clashing into his officer, he potentially talks his way through the weak coalitions. Like JibKor the annual outlook is also favorable to him especially so with output protruding.
So both has a favorable outlook. Between output and resource, which do you think has a better potential? 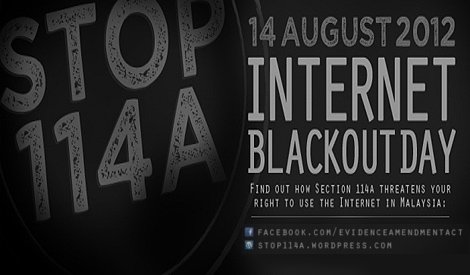 3 Pillars And A Criminal Breach Of Trusts 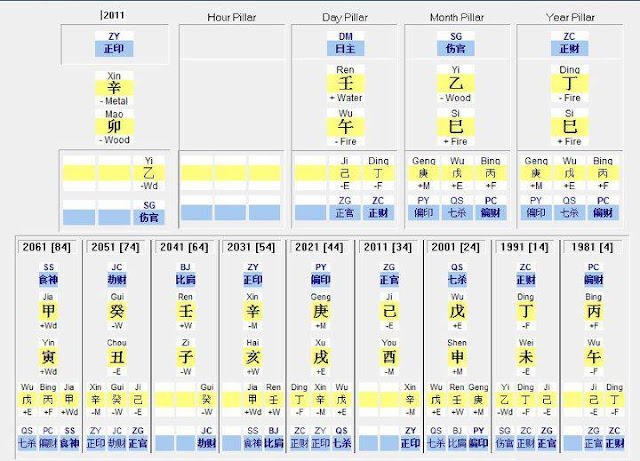 The above example, from a case shared in our Facebook, it is rather straight forward without the Hour Pillar, and it qualifies as a weak chart. However, matching description: -
“… a lady’s chart who was suspected of committing ‘criminal breach of trusts’ was caught on 20 January 2012 with incidents started in 2011 while she is in her 30s…”
So, in XinMao year, her resource is revealing. For a weak chart, resource is favorable, but why she was caught? Looking at Mao, her action, which is also assumed unfavorable for a weak chart, is in a state of destruction with Wu, wealth, which is also assumed unfavorable for a weak chart. Unfavorable element destructing unfavorable element should have been favorable? Yet it is not the case?
Something must have been very wrong in the reading of this chart. If this chart falls within the special structure of a follower’s chart, then the reading would be entirely different. One postulation states that with the resource revealing, the following structure would been broken. Therefore, read it as a weak chart. Again, this is not the case. One cannot play football by shifting goal post.
Well, this event state that she is engrossed by NEED for money (negative wealth) rather than GREED for money. In her character palace, it is the appropriate star even though it is not sentimental. There is something that has pushed her to the limits before she resulted to her actions. The ingredients are in the hidden stems.
Looking as the cause and effects of this event require a throughout understanding of the 10 gods and movements within the chart. Likewise, if you had spent a fortune learning the art of BaZi and you are not able to qualify its strength, not able to understand its relationship between elements in the palaces, not able to comprehend movements and clashes between elements, not able to open up the chart to identify the underlying reasons and consequences, it is time to re-learn the art.
We proudly present to you again, our QuanYuan BaZi workshop in an improved edition. Click HERE for details. 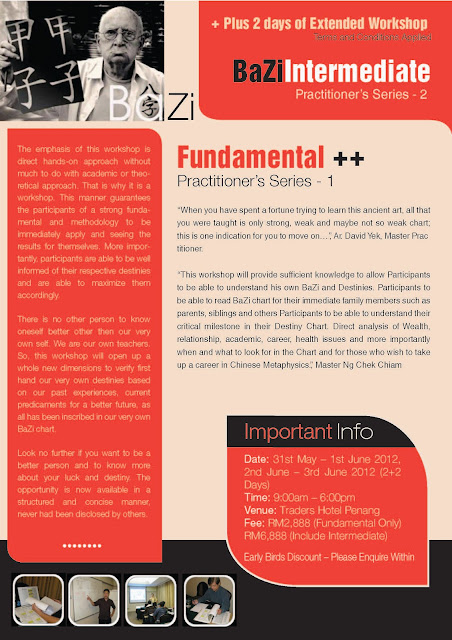 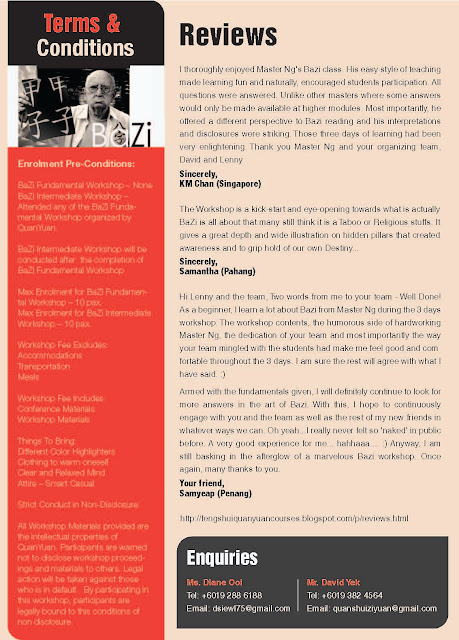 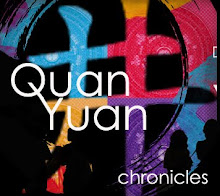 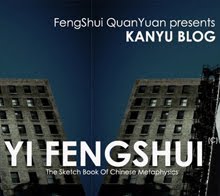 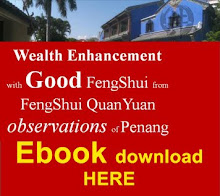 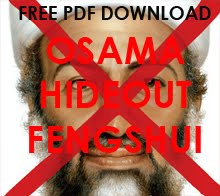 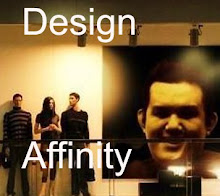 We seek your understanding that when the services, such as Instructions on Metaphysics, BaZi reading or FengShui audits are given or a request for such services were made, the consultant who practices the arts usually give a little bit of himself up to help the person seeking advice. Traditionally, a token sum is made in a small red packet, called "hung bao" to replace whatever that has been taken out. If you feel that the advice rendered or knowledge provided was useful and helpful, please donate a small sum accordingly.

To standardize the fee for reading via email, the charges is USD388 for a reading per chart. Feels free to email me at yektakwai@hotmail.com with your date of birth, time of birth and specific questions limited to 5 i.e, career, wealth, health, relationship and forecasting.

Kindly place the donation via the paypal account and I will get back to you with the reading soonest possible.